For a fun day on the ice, not much tops catching a mess of hand-sized panfish to bring home. Panfish like bluegill and the various types of sunfish have always been among the most popular species with ice fishermen because they’re numerous, easy to find, and relatively easy to catch. The fact they are some of the easiest to clean and tastiest fish makes it all the more fun.

When the bite is hot, panfish can be caught almost one after the other. But when the bite slows, we all need to have tackle options at the ready to keep the bite going. Those just getting into the sport should try out a variety of these panfish ice fishing lures to determine which works best for them and then stock up their ice jig boxes. Let’s take a look at some of the best ice fishing lures for panfish to fill your tackle box with this winter.

The panfish category of fish includes bluegill, sunfish, perch, and crappie, but for this article, we’re going to focus on the first two. Bluegill and sunfish can be reliably caught all winter long under the ice, and they’ll often behave aggressively toward artificial bait presentations. Although their warmer weather food types are at a minimum in the winter and fish are sluggish and lethargic, they still get hungry and need to feed on whatever they can find.

It’s generally agreed on that the best way to catch panfish on hard water is with a horizontal or vertical jigging technique, and since it’s dark and murky under the ice, lures that are bright and colorful, have a reflective finish, or that glow in the dark are the most likely to catch their attention. Adding some noise like a rattle or buzz into the mix doesn’t hurt either.

The smaller types of spoons, jigs, and plastic baits are the weapons of choice when it comes to panfish ice fishing lures. Here’s a quick look at all three.

Now we’ll review our top picks for panfish ice fishing lures. Half the fun of fishing on the hard water is trying out different types of lures to learn which are the most effective and when and where. Of course, a lot of guys and gals get a lot of enjoyment just out of collecting them, but that’s another article.

Gulp Alive Waxies are extremely realistic imitations of real live wax worms or maggots, which panfish love any time of year but especially during the sparse winter months. And as an added bonus, they’re treated with a scent that smells just like the real thing. Gulp Waxies are available in pink, green, and white.

These soft plastics are a great alternative when the cold temps make baiting live worms a difficult chore. If you drop these into an actively feeding school of bluegills, they’re almost guaranteed to bite. These should be used at the end of 2-4 lb ice fishing line and jigged quickly with only slight movements of the rod tip.

The Rapala Jigging Rap is a classic ice lure that comes in sizes for all species that swim under the ice. It combines a realistic minnow or shad shape with a V-shaped tail for lifelike swimming motion. It has single hooks on each end and a treble hook on the bottom for high percentage hookups.

There are dozens of color pattern options, but in general, we like natural colors in the shallows, while brighter and more reflective finishes are more effective in deeper waters. You certainly have plenty to choose from with this all-time popular ice fishing lure. Once you’ve located a congregation of panfish with your fish finder, the Jigging Rap will swim in rapid circles above the school to draw them up to the bait. The fins are known to be a bit fragile so best to keep them away from rocks and other obstructions.

One of the main advantages of the VMC Tubby jigs is that they’re made out of 100% tungsten, a very dense metal, so they are smaller than lead, more sensitive, and drop quickly to the bottom or to the desired jigging depth. The VMC Tubby jigs sport a super-sharp hook and a 90-degree hook angle with a horizontal presentation that provides good hooking reliability.

They’re available in three different weight and hook sizes and six color options, including glow-in-the-dark finishes which are advertised to last for up to 15 minutes underwater before needing a recharge. Tungsten panfish jigs are great when paired with imitation or live wax worms.

The tiny VMC Tungsten Fly Jigs are made to mimic copepods and other types of insect larvae and are intended to be used when these aquatic creatures are hatching. They feature a realistic feathery hackle and a soft plastic body, a tungsten head which literally makes them drop like a stone, and a 90 degree VMC Power Gap hook for better presentation and hook set action.

The Fly Jig is available in three weights and hook sizes (1/16, 1/32, 1/64 oz) and a range of natural, bright, and glow color finishes. The VMC Fly jig is an excellent finesse ice jig for when the bite gets tough.

The Demon Jigs have earned a glowing reputation with anglers for their effectiveness on all types of panfish including bluegill and sunfish as well as bass, walleye, and even catfish. They feature a beetle-like profile with a glossy two-toned color, their proprietary Glow Brite finish on both sides, and nickel spoon backs on the fluorescent color options. A Demon jig comes in 1/40, 1/64, and 1/100oz sizes and is great to match up with worms, grubs, and minnows.

This killer tungsten ice jig features the popular and proven Chekai head design, which are effective on any type of panfish and other species like Perch, and even Walleye. The Chekai Jig is made from 100% tungsten with smooth rounded sides, kind of like a pill, for a  swift sink down to depth and accurate and sensitive jigging action.

Like all Custom Jigs & Spins lures, they are finished in durable epoxy paint schemes in a variety of bright and natural and glow colors with large fishlike eyes and a concave face. The jig has an optimal hook gap for a reliable hook set. For an irresistible presentation, pair the Chekai with live bait or a microplastic lure.

The Tungsten Wax Tail jig is yet another great offering from VMC. This one features the company’s patented Trigger X Wax Tail soft bait intended to mimic wax worms, grubs, and other types of bug larvae. This type of worm and jig combo is excellent during the hatch or for all-around fishing under the ice.

Like their other popular ice jigs, it’s made from 100% tungsten for fast drop and precision jigging and equipped with the Power Gap hook. Three sizes and six colors available, with the glow, finishes lasting up to 15 minutes before needing a recharge. The only complaint that users have voiced is that replacement Wax Tails can be hard to find, but of course, it can be used with other types of soft plastic baits.

Maki plastics are known to be highly effective on bluegill and sunfish, perch, crappie, and even bass. The twin tails and cilia hairs give it a jiggly and enticing action coupled with natural or bright colors for both shallow and deep water conditions. Mate with your favorite jig for the hatch or anytime.

Created with panfish in mind, the Gill Getter sports a lifelike flat-bellied bug appearance that will appear to fish to be a worm, larvae, or grub of some kind and meant to be eaten. The Gill Getter features a fish scale glittery finish for maximum attraction. It can be fished with soft or live bait using a quivering rod tip action, this jig will jump and dart around like frightened prey. Northland has created a winner with this jig, it’s one of the better panfish ice fishing lures on the market.

This plastic-bodied soft lure features a long active tail combined with a balanced head and level presentation to imitate the action of small minnows and shad. The Shrimpo is available in six colors for shallow or deep fishing and can be paired with a worm or maggot for an even more fish enticing appearance. The slender tail creates a quivering worm action that is super effective on panfish and even works great as a walleye jig. 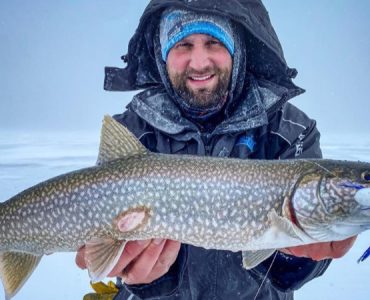